The business case for employer-supported childcare

In late 2017, IFC released a new flagship report, Tackling Childcare: The business case for employer-supported childcare. Ergon was part of the research team, which was led by the Washington-based Institute for Women’s Policy Research. In 2018, IFC has been conducting a series of regional events to disseminate the findings of the report. Kirsten Newitt presented key messages from the report at an event in Sarajevo on 23 April.

Lack of access to quality and affordable childcare remains a major barrier to women’s greater participation in paid employment, because women are still much more likely than men to bear childcare responsibilities. In many countries, traditional sources of childcare (e.g. from close or extended family members) is becoming less available as families become geographically more dispersed as workers seek out new work opportunities, yet formal childcare is often expensive and out of reach for low- and middle-income families. The ‘care gap’ often constrains the choices that working parents – particularly mothers – make about work, making it more likely that they will work in the informal economy, where work is precarious and lower paid but more flexible. Where quality childcare is available and affordable, parents have a greater array of choices for entering and advancing in the workplace.

The IFC report sets out the case for why better access to childcare is good for business and good for development, and how addressing this particular barrier to women’s participation in paid employment can benefit employees and business alike. For economies and businesses to be functioning to their full potential, they cannot afford to overlook the talents and experience of women, who make up half of the population. For companies, there is a growing body of research to show that gender diversity brings significant business benefits, including more robust-decision making at senior levels, and improved productivity and innovation. At the macroeconomic level, economies can significantly boost growth potential by making the most efficient use of the skills and capacity of all of their people, women and men alike. In this light, it is critical that gender equality is not seen just a ‘women’s issue’, but rather as key to broader processes of economic and social development.

To illustrate the issues, the report includes ten detailed company case studies predominantly taken from developing economies, showing how companies can support employees’ childcare needs, and the kinds of benefits that can accrue to the business.

The case studies demonstrate that there are a wide range of options for employers and the most successful childcare strategies are those that are tailored to the needs of employees and aligned with the operational needs and resources of the business. There are also examples in the report of how the private sector can also collaborate with government on childcare; for instance, engaging in policy dialogue, initiating public-private partnerships, or supporting public providers of childcare. 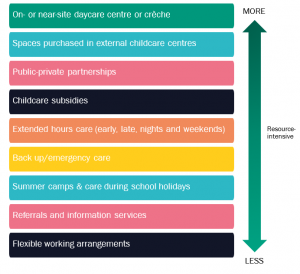 There are equally a range of different reasons why companies choose to support childcare, including regulatory requirements for creches (e.g. in Turkey) and industry norms. Nevertheless, there are common themes in the kinds of benefits that companies report, including:

Early childhood development and education is clearly an area that requires government intervention, in terms of policy-making, investment and regulation, but this report shows that there is also a role for private sector actors in helping to address childcare gaps.