Matt Waller has recently returned from Commonwealth Sport’s General Assembly (CGA) in Kigali where there was an entire day dedicated to the topic of human rights. Matt’s participation included running an interactive session to feed into the development of Commonwealth Sport’s Human Rights Strategy. This was followed by a consultation with CGAs on guidance that Ergon are developing on behalf of the Centre for Sports and Human Rights on the integration of human rights into national multi-sports bodies’ day to day operations. 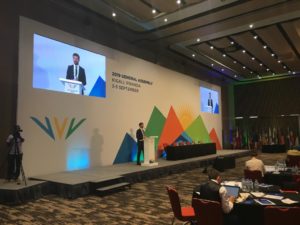 Steve Gibbons spoke at the All-Party Parliamentary Group (APPG) on Sport, Modern Slavery and Human Rights in July 2019, where he provided evidence of Premier League clubs’ compliance with the reporting requirements of the UK Modern Slavery Act.

Also in July, Kirsten Newitt made a presentation on international good practices and directions on gender equality at Co-op’s gender strategy workshop, attended by members of Co-op’s ethical trade team, as well as NGO partners and other experts.

The Ergon Netherlands office has been working closely with Dutch development bank FMO on developing and implementing a human rights programme to build the capacity of in-house environmental and social specialists through a series of training, coaching and mentoring activities. This work is being led by Alastair Usher, supported by Anya Marcelis. In September 2019, Alastair facilitated discussions at FMO’s multi-stakeholder Human Rights Day at the Peace Palace in The Hague. 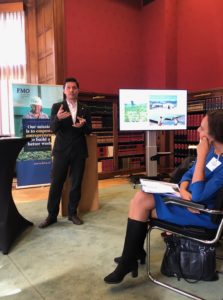