Ergon has been tracking how companies are reporting on modern slavery since the UK Modern Slavery Act 2015 introduced a requirement to make an annual statement for businesses with turnover of more than £36m. In our latest report we look at a group of 150 companies last analysed in April 2017 to see if their statements have changed, and we have supplemented this with interviews with leading companies to assess if reporting is driving change within businesses. The report can be downloaded here.

The first surprising finding is that in the 18 months since our last analysis, only 54% of companies had produced a new statement. The Act states that companies should report every year, and government guidelines state that these should be published within six months of the financial year-end. A substantial minority of companies in our sample do not appear to be following this.

Our second finding is that of those companies that had produced a new statement, 58% had incorporated what we regard as substantial changes to content such as descriptions of new due diligence processes or the outcomes of risk assessments or actions taken to mitigate risks. The rest of the statements contained either minimal updates typically to descriptions of business structure or supply chains or made no amendments at all other than to change the date of the statement.

Third, we have analysed the ‘quality’ of reporting on the topics recommended by the Act that should be covered, using our internal benchmarking methodology. We found that statements are getting longer but not necessarily more informative. Our analysis suggests that reporting in terms of content, scope and detail has remained the same with no appreciable change in quality. We conclude that three years down the line, reporting appears to have plateaued and there is little sign of continuous improvement. This runs counter to the government’s Guidelines which state that ‘Organisations will need to build on what they are doing year on year’.

For smaller businesses and those out of the public eye, there is a danger that reporting under the UK Act may become stale, repetitive or even absent. However, outside our sample, our interviews with leading companies suggest that for these businesses, especially those operating in or with supply chains in challenging environments, the Act has been important for promoting change. The most important impact has been in raising awareness of modern slavery internally, in particular for senior leaders. Also, in many larger companies due diligence processes have become more embedded and have extended to broader business areas beyond product supply chains, producing data on the risks that were previously unconsidered or hidden. This is positive for developing strategies to combat modern slavery and to protect potential victims. Fair recruitment would be one example of an emerging issue that would not have received such attention without the passage of the Act.

Within our sample of updated reports, we have analysed the various reporting topics that are recommended to be covered in statements. Consistent with our previous analyses, reporting on modern slavery policies is generally strong, and it is notable that leading companies are calling out new policy commitments on fair recruitment for migrant workers. By contrast, detailed is information on risk assessment processes continues to be rare. While some leading companies have published maps of their suppliers, in general, there is considerable scope for better reporting on the geographies, business functions or supply chain tiers where risks lie.

We have also looked at the specific actions taken to combat modern slavery. As with our last analysis, a fifth of statements continue to provide detailed or moderately detailed information on actions taken, with most such actions relating to internal policy or procedural changes. However, we have found there is more reporting in our 2018 sample on remediation actions taken where instances or indicators of forced labour have been found, often illustrated by case studies.

On other recommended reporting areas, discussion of KPIs as a means of assessing effectiveness continues to be the weakest aspect of most statements, with 86% of statements not including any detail on KPIs. Training activities are generally well-covered in statements.

Finally, according to the Act, a statement must be approved and signed by a director, board member, or partner of the organisation. We have found that compliance with this aspect has improved with only 6% failing to show senior level approval, compared with 21% of statements in our previous sample. 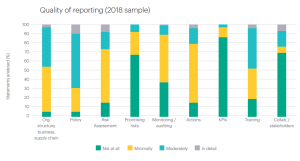 These findings will be of interest to the government’s review of the operation of the MSA which includes a review of the s.54 in terms of ‘how to ensure compliance and drive up the quality of statements produced by eligible companies’. The government is under pressure to introduce tougher monitoring an enforcement mechanisms along the lines of Australia’s proposed modern slavery law which includes a central registry of statements and mandated rather than recommended content.

In terms of reporting being a driver for change, it is clear that, certainly initially, the board-sign-off requirement sparked internal policy reviews and risk assessments as directors required assurance and information. But this enhanced level of activity is not necessarily observable across the board, and several of the leading companies with expansive reports that we interviewed expressed some frustration that many companies were simply not producing reports on time or to any degree of detail. They suggested that more effort should be focused by government on raising the bar among companies who are not in compliance or who produce relatively weak reports. With several pieces of new legislation on modern slavery reporting being proposed in various countries, it would seem that voluntary approaches may soon give way to greater regulation.