The World Benchmarking Alliance (WBA) has published the fifth edition of the Corporate Human Rights Benchmark (CHRB) assessing over 100 leading international companies on their human rights performance. This time, the companies included are from three different sectors: food and agriculture, Information and Communications Technology (ICT) and automotive manufacturing.

Following an updated methodology, this year’s benchmark focuses more on the actual performance of companies in terms of practical implementation of human rights-related measures throughout their supply chain, rather than on the commitments they have at policy and governance level. In this blog post, we present some of the key findings from this year’s benchmark and capture some of the reactions to the ranking from the world of business and human rights.

Food and agri on top

Food and agriculture companies seem to be ahead of the game: the first three places in the ranking are occupied by companies from this sector. Unilever leads the list followed by Wilmar International and PepsiCo. 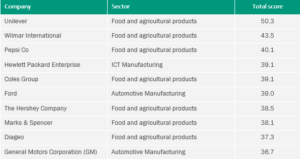 Human rights due diligence is a matter of leadership and resources

The benchmark found a strong positive correlation between higher scores and the allocation of responsibility to senior management level or above. 75% of the companies which have made the biggest improvement within the ranking over the past years assign responsibility for the implementation of human rights due diligence processes to board-level and senior management level. These companies also tended to have more resources and expertise in place for the day-to-day management of human rights due diligence.

Stakeholder engagement needs to be prioritized

Handing upstream supply chain actors the tools ‘to do the job’

This year, another key finding is a lack of human rights due diligence further up the supply chain (‘upstream’). While it is common – and appropriate – for companies expect suppliers to implement human rights due diligence measures, often they do not sufficiently follow up on whether implementation actually takes place. For example, about a third of companies include child and forced labour, land or women’s rights in codes of conduct and contractual agreements. But in practice, only 11% engage with suppliers to address these topics. The discrepancy between commitment on paper and practical implementation along the supply chain becomes particularly visible in case of ICT companies. For example, while over 90% include the issue of recruitment fees in their human rights due diligence commitments, only a third of them actually support their suppliers and only 9% monitor and report progress on this topic.

The last key finding involves the nexus between human rights and climate change. The benchmark shows that within the automotive sector, 8 out of the best-ranked companies (including Mercedes Benz and Volkswagen) in the CHRB are also among the ten highest scoring the just transition ranking. Nevertheless, for most companies action on climate change and on human rights are still disconnected in spite of the disastrous human rights consequences associated with climate change.

Overall, there is progress, but it remains slow and piecemeal for many companies. No doubt an essential driver for recent change has been the recent pieces of mandatory human rights due diligence regulation including in France, the Netherlands and Norway. There is more coming down the line with Germany’s Supply Chain Act, the Lieferkettensorgfaltspflichtengesetz (LksG) entering into force in January 2023 and the EU’s draft directive moving slowly – if controversially – forwards. So we can expect scores to improve still – at least for companies operating in or beholden to European legislation. However, as a lack of provisions on stakeholder engagement was one of the major points of criticism of the EU Commission’s proposal, it remains to be seen whether companies will be able to improve in this area during the inevitable delay before mandatory regulation becomes effective.